Pictured above are the five distinctly different types of Family Computer console that I own. From left we have:

There are a lot of other variants that I don't have and probably don't know about but anyway, these are the five that have fallen into my hands over the years.

I'm a little torn about which one I like the best. The one I use the most is the AV Famicom: 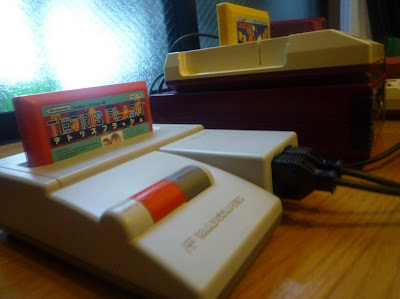 My preference for it is purely functional though. It gives a clearer picture and is easier to hook up than the old RF switch-dependent Famicom, so I use it more.

I like the look of the old Famicoms much better than the AV Famicom though: 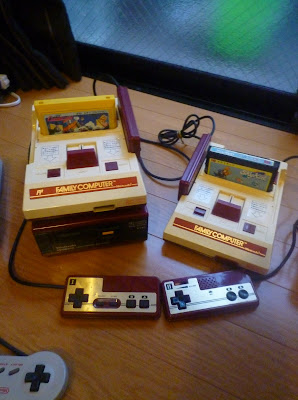 The AV Famicom is much sleeker than the old red and white, but I don't view that as a positive thing. Aesthetically the two versions are worlds apart. The AV Famicom, in terms of its design, shares much more in common with the XBox 360 than it does with the original Famicom, even though they are the exact same console on the inside. 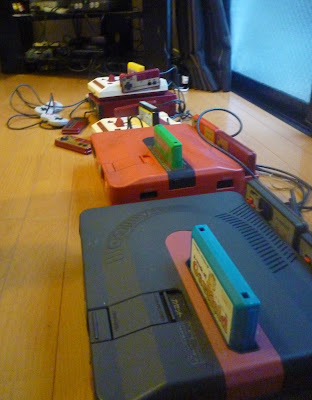 The Twin Famicoms for their part are very much the dark horse candidates of my Famicom consoles. I've been so frustrated by the fact that I still can't play them (lacking the necessary AC cables). Chronologically their release falls in between the original Famicom and the AV Famicom, though the overall "feel" of their design makes me categorize them with the old school Famicom rather than the AV one. They look nothing like the old school Famicom, but they share with it a certain "clunky and colorful" appearance that I find very endearing. Give me clumsy over sleek any day - at least so long as it doesn't affect the console's performance.

I feel that if I ever get them working they'll probably be the ones I'll rely on and like the most....but I'll never know for sure until I get a bloody AC adapter for them. Oh, and then I may find I'm in need of a new belt for their disk systems, but I'll cross that bridge when I come to it.

One curious thing that really separates the Twin Famicoms from the others, as Bryan at the Gay Gamer noted recently when he got his, is their size. They are basically only slightly smaller than a regular Famicom and an FDS put side by side: 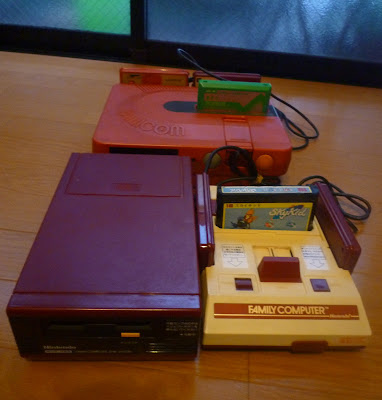 Obviously that is because inside they are a regular Famicom and FDS put side by side. Still though, I kind of wonder why they chose to orient them like that instead of stacking them, like you do with a regular Famicom/FDS combo: 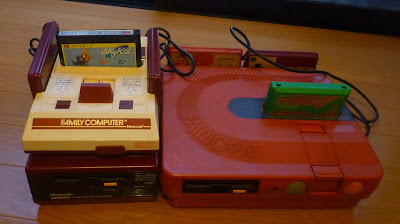 It would dramatically reduce their profile and save a lot of shelf space - which readers of this blog will know is one of my over-arching concerns in life. I'm sure they had some valid technical or cost related reasons for doing it the way they did, but still. Would have been kind of nice.
Posted by Sean at 5:06 PM