Star Wars and the Famicom: A Tale of Two Games

As astute readers are undoubtedly already aware, the Famicom was first released in Japan in 1983. In that same year, half a world away in the picturesque village of Dunrobin in eastern Ontario, a 7 year old kid was anxiously awaiting the release of the mega-film event of the year: the Return of the Jedi.

At that early stage in my development, Star Wars had been an all-encompassing presence in my life for about two years. In 1981 for my 5th birthday my heroic dad had gone and somehow gotten his hands on a VCR (a pretty rare item back then) and a copy of Star Wars. I had about half a dozen of my kindergarten classmates over for my party and it was decidedly THE event of the Dunrobin social calendar among 5 year old boys that year. I remember sitting on the shag-carpeting of our rec-room floor, watching in eager anticipation as my dad tried to figure out how to hook up the wires to our TV, which was one of those big types in a wood frame designed to be a piece of furniture in its own right. Of the lot of us, only one had ever seen Star Wars before and he assured us, as the film was about to begin, that it was the greatest thing. Ever.

It turned out that my 5 year old classmate, whose name is now lost to the ages, would probably be the only person in my life to ever offer such high praise for a film and subsequently be proven correct when I watched it. We were all blown away. Bouncing off the walls. It was insanely awesome. From the moment “Star Wars” flashed on the screen we were hooked. The Star Destroyer passing overhead, blasting away at the little rebel ship. The camera pauses on an older looking rebel trooper with his gun poised, waiting for the impending assault. The hero of the film? Nope, he is one of the first to die when the stormtroopers blast their way in. Wow. My life would never be the same again. A few weeks later my parents took me to a repeat screening of the Empire Strikes Back at a theatre in the big city of Ottawa. The silver screen experience that time.

My fragile mind was blown away. Within a year my room was overflowing with massive quantities of Star Wars merchandise - the interior decorating choice of pre-pubescent males with discerning taste in the early 1980s.

Anyway, enough with the historical background and back to that Famicom-getting-released-in-1983 thing. I find it interesting that Return of the Jedi was released in the same year as the Famicom and yet in the entire 11 year life span of that amazing console they never got around to making a Return of the Jedi game for it. Actually it took them about 4 years to even get the first Star Wars game out and they barely squeezed in an Empire Strikes Back game in the console’s 9th year.

I own 2 of the 3 Star Wars games made for the Famicom. One is the 1987 Namcot Star Wars, released in Japan only and the other is the Empire Strikes Back game released by Victor in 1992. Victor also released a version of Star Wars, which I don’t have (but really want). 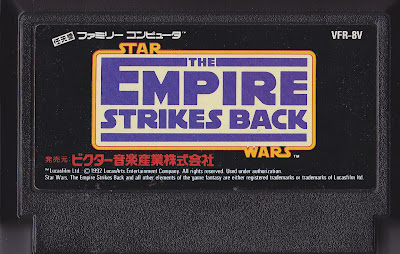 Of the two games that I do own, there is a striking difference in style between them which is what I kind of want to talk about in this post. I really like both games, but in terms of Star Wars nostalgia value they are worlds apart. I hate to pick favorites among my Famicom games (you never know, they might have some sort of hidden innate intelligence and it might hurt the feelings of the ones that get shunned). Still though, the Namcot Star Wars blows the Victor Empire Strikes Back away. Let me explain why.

I preface my explanation with a question. What is the best Star Wars film to be released post-1983?

If your answer included anything made by George Lucas, you are wrong. The correct answer is the mind-blowingly fantastic review of Episode 1 by Mr. Plinkett of RedLetterMedia. If you haven’t seen it yet, then watch and learn. He succeeds where no sci-fi geek has ever succeeded before: tearing apart the minutia of a sci-fi film in a way that is both entertaining and hilarious. I think I’ve watched it 3 or 4 times. It is that good.

OK, this praise is getting unseemly so let me qualify it with a point of disagreement with Mr. Plinkett. He says that the moment at which Star Wars was ruined forever occurred during Episode 1. In other words, it happened in 1999, the year of that film's release. That is incorrect. It happened a few years earlier – 1992 to be exact. Coincidentally, the year the Empire Strikes Back game was released on the Famicom.

In 1992 I was in high school. My childhood obsession with Star Wars was by then a faint memory as throughout the mid to late 80s my interests had naturally moved on to other things. The seeds for a nostalgic revival of my interest were there though. I happened to be in a book store sometime that year when I saw a Star Wars book. This piqued my interest. The Star Wars merchandising machine had dried up sometime in the late 80s and for a few years the store shelves had been completely empty of Star Wars stuff. I took a look at it. Some guy named Timothy Zahn had written a sequel trilogy to Star Wars. Wow. I had to have it.

I read that trilogy with a great deal of enthusiasm sometime in 1993. It was a big let down. Zahn seemed to be a reasonably capable writer, but it was also blatantly obvious that his license to write the books had some sort of provision that read “You may NOT kill off any of the established characters from the films in your books.” Of course the books centred mainly around putting the established characters from the films into dangerous situations. Once you realized that nothing would ever happen to any of them, the whole thing just became boring.

Unfortunately that trilogy led to a revival of interest in Star Wars that spawned a whole shitload of other insanely boring Star Wars books and merchandise which eventually led to the god-awful prequels being made. So I say that 1992 is the year that Star Wars officially began to suck, not 1999. It’s a relatively minor point, but one that is relevant to my two Star Wars Famicom games.

One side effect of the explosion of Star Wars crap that occurred in the 1990s was that Star Wars fans started to become extraordinarily anal retentive about this thing called “canon”. I think this may have been the result of an unhealthy influence of Star Trek fans on Star Wars but I’m not sure. At any rate, suddenly every Star Wars related work that was produced had to fit exactly into this established story line and anything that didn’t was by definition bad. This was like putting a huge ball and chain on the creative process of anyone writing about Star Wars and this is reflected in the shit quality of a lot of the crap that has been produced in the past 18 years – prequels most definitely included.

Now compare my two Famicom Star Wars games – one made in 1987 and the other in 1992. The 1992 Empire Strikes Back game is usually praised for being a faithful reproduction of the film. They stick more or less to the storyline and don’t make any radical changes or anything. And I should stress that it is a good game – but it needs to be said that it is a good game not because it sticks closely to the original movie but despite the fact that it sticks closely to the original. Its just a fun game to play.

I find it surprising that some people actually criticize the game for this: to my mind this makes it a much better game. In fact I would go so far as to say this is one of the best Star Wars video games ever, at least from a creative point of view. Playing the Empire Strikes Back I basically know what the next level is because its whatever would be next in the film. Which, I guess, is fine. Playing Star Wars though you don’t know what is coming next. What are these? Frogs? I’m on Kessel? That wasn’t in the film. Wait, why did Darth Vader turn into a scorpion? Screw it, this is cool.

The closest cousin to the Namcot Star Wars game I can think of are the Marvel Star Wars comics from the late 70s/ early 80s. I used to read those when I was a kid. They were awesome. They probably had the same licensing deal that Timothy Zahn later got (don’t kill off any main characters) but they got around it by just making up a crapload of random characters to shove in there – I remember a green, humanoid rabbit for some reason – and most of the issues I remember barely featured the main film characters at all. Probably I’m viewing this through rose-tinted lenses, but I remember those comics being really creative and fun to read - something the 1990s books were definitely not.

Anyway, that is my view of Star Wars through the prism of two Famicom games (or vice versa I should say). I should stress that I don’t think everything about post-1992 Star Wars is bad. Some of the video games have been great – I play Episode 1 pod racer on the N64 all the time. But they are great despite the fact that they are connected to the current Star Wars marketing machine, not because of it.