Retro-game Shopping will never be the same again

Apologies for not updating this blog as often as I should, this was a busy summer around here! I should take the opportunity here to thank Bryan for the flattering write-up he did about Famicomblog on his wonderful blog here. Much appreciated!

Anyway, as is often the case with my recent posts, in this one I will be describing another one of my Famicom-related shopping experiences. Over the past two days I have gone on a massive buying spree at my favorite retro-game store, Omocha Soko.

I am sometimes given to exaggeration, but I think I can confidently say that I made retro-game shopping history over the course of the past 24 hours of shopping. I was fortunate enough to hit the greatest bargain the world has ever created. Even by Omocha Soko's generous standards this blows away every other sale they have ever had. Remember last month when I was bragging about getting two Twin Famicoms for 100 yen each? That was nothing. THIS was the motherload.

My story actually starts about 3 days ago when I popped in to Omocha Soko to see if they had anything new. The Famicom game racks were pretty much the same as usual - I've picked them over for the past two years and now basically have every game they've got out there. I also checked the console and controller sections but not much new there either.

At the back of the store, however, something really caught my eye. Stack upon stack of these black plastic crates filled to the brim with old consoles, controllers, cables and games of every type. Usually when they get new stuff in (they buy stuff from people who come in off the street) they'll just dump it in the back for a few days until one of their employees gets around to sorting it out and putting prices on it. Normally they might have at most one or two of these boxes out and when I see them I know that within a couple of days they'll have new stuff on the shelves so I make a note to visit again in the next day or two (you have to hurry when they put new stuff out, otherwise other people will beat you to the good stuff).

This, however, was unlike anything I had ever seen before. They had these things stacked almost to the ceiling, row upon row of them. Somebody must have literally dumped an entire truckload of old video game stuff and just said "Just take it all."

Because they hadn't put the stuff on sale yet I couldn't see exactly what they had, but it looked promising so I made a note to come in soon and have a look at the stuff when they put it out for sale.

Yesterday I made my second visit and, sure enough, all the stuff was out for sale. But nothing could have prepared me for the sight that beheld my eyes. Apparently, due to the sheer volume of stuff they had gotten and the massive pain in the ass it would be to sort it all out and untangle all the wires, they just put the crates out with signs saying (basically) "Everything in these boxes is 50 yen. Nothing has been tested so buy at your own risk." I snapped a couple pictures of some of the crates. You aren't allowed to photograph so I did this somewhat surreptitiously (gee, I hope nobody from the store reads this blog), apologies for the blurry pics. These ones had controllers, consoles and a million cables in them: 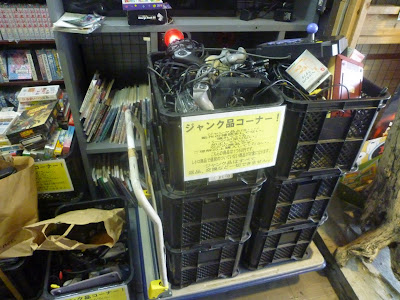 And these ones had tons of games (only the stuff in the crates were 50 yen, the stuff on the walls was seperate): 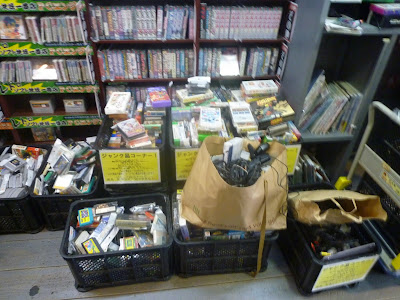 The above pictures only show about 1/3 or so of the total amount of stuff. It was massive.

Now, 50 yen is only about 5o cents US so you might expect these crates were full of crap. Not so. Well, not exactly so. Most of the stuff actually was crap, but there were a lot of GOOD things in there too. And by virtue of having arrived at exactly the right time I had first crack at picking them over!! My retro-game shopping dream come true!!!

Being bicycle-bound I had some finite limits on the amount of stuff I could carry, so I ended up making two trips, one yesterday and the other today. This was today's haul, still in its bags: 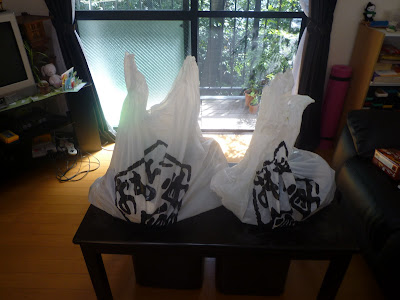 Fist, the consoles. One (working) AV Famicom with both controllers (this counted as just one item despite really being three): 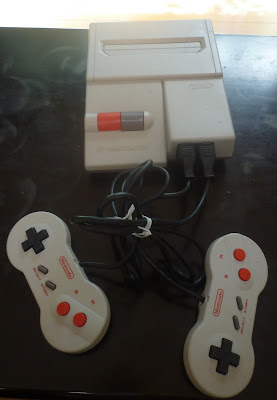 One functioning, clean old-school Famicom complete with the expansion port cover (those things are hard to find): 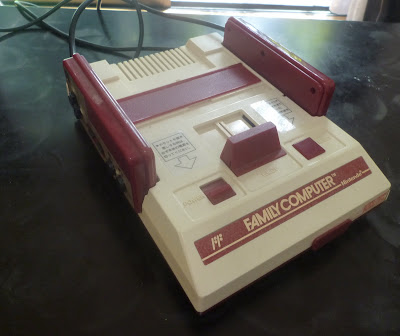 One PC Engine complete with Disk drive and interface unit (as with the AV Famicom, this only counted as one thing despite it, really, being 3). I have all the cables and a controller for another PC Engine which has a busted console, so this works out perfect for me: 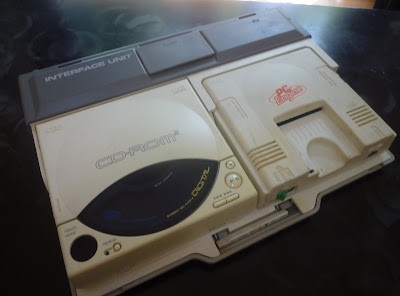 Two Sega Mega Drives. I actually didn't want two of them, but ended up getting two kind of by chance. On the first day I picked up one that was just console-only. On the second day I rummaged through the bins looking for an AV cable and AC adapter for it. At the bottom of one of the bins I found a bag with another Mega Drive complete with the cables (though missing the controllers) and I figured what the hell: 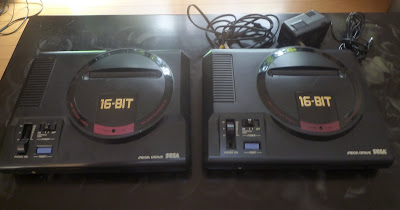 And next, the Famicom controllers. 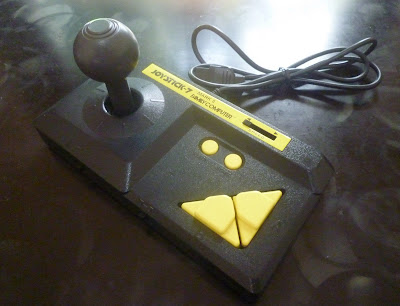 And a Famicom Hori Controller: 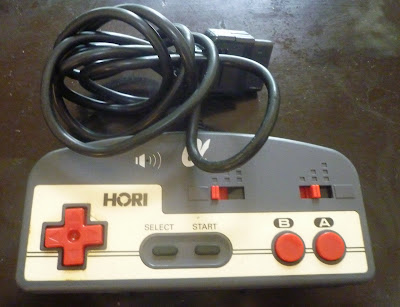 And two Joycard controllers, one boxed with a picture of Takahashi Meijin on it: 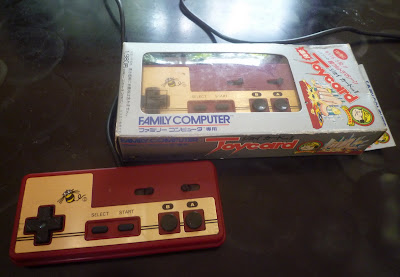 And did I get games? Yes I certainly did.

First I got this fantastic copy of Lode Runner for some 1980s 8-bit Sony console that I don't own (edit: this is a game for the MSX "Hit Bit", a home computer released in 1983). I'll probably never be able to play it but man, I could not resist buying this for the awesomeness of that cover-art. This is without a doubt my favorite box-art of any video game I've ever had: 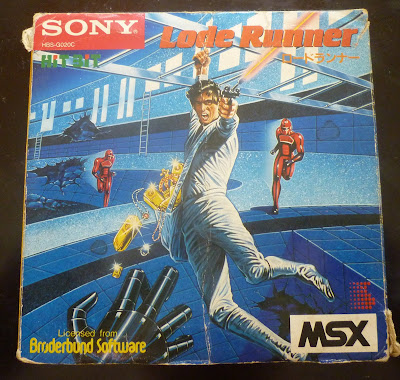 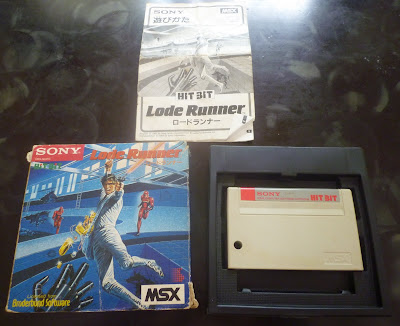 And Famicom Carts? Oh, you bet they had Famicom carts. GOOD ones, not just a bunch of baseballs and golfs. I picked up 32 of them. To be honest I already owned copies of most of these games but I got these mainly for the purposes of future trades or something. These ones I got today: 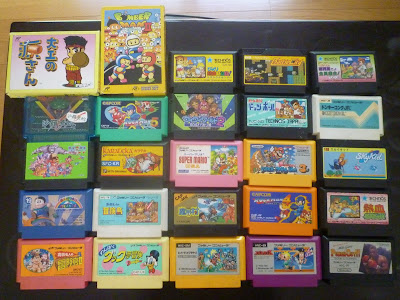 And these ones yesterday: 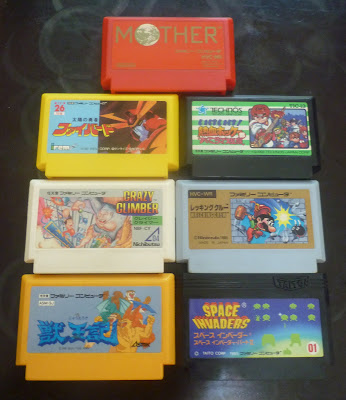 I had been wanting "Crazy Climber"for a really long time and was really excited to find it.

They also had a bunch of Disk System games. I have 3 disk systems now (two in Twin Famicoms and one FDS) but none work. Still for the future day when I actually get one of them up and running I now have some awesome games to play: 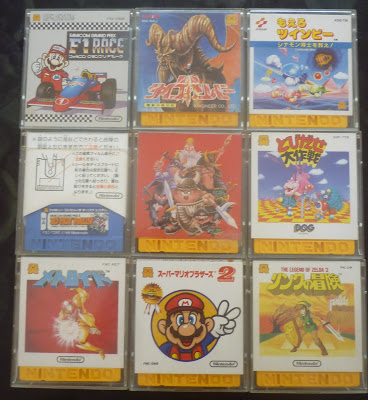 And I got these games for other consoles. Perfect Dark for the N64 is one I've been looking for a long time for, but the cheapest I've ever seen it was 3,000 yen (ironically almost the same amount I paid for everything here). I just got the Sonic game so I'd have something to test my new Mega Drives with (when I get a bloody controller for them anyway. Of the hundreds of old controllers in those endless stacks of crates I couldn't find a single Mega Drive controller): 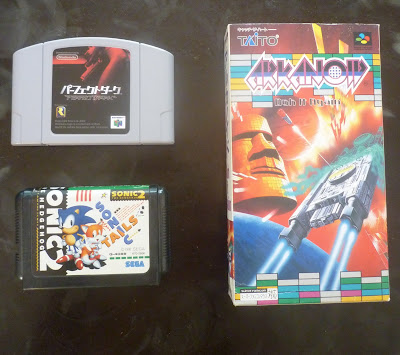 The coolest thing I found though was hidden at the bottom of one of the games crates. I though it was just some piece of junk at first and almost ignored it, but when I took a closer look I realized that it was an original Game and Watch from 1982: 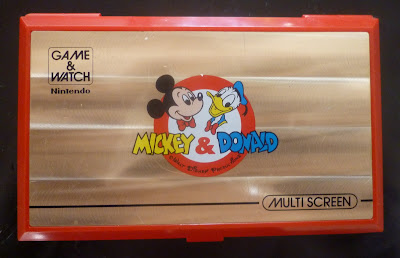 I've really wanted to get a Game and Watch for a long time, but they are so expensive (hard to find for less than 5000 yen) that I've never bothered. I probably wouldn't have gone for Mickey and Donald, but beggars can't be choosers and it was still a good find. I have to get some batteries for it to see if it still works, but its in pretty good shape (edit: got the batteries and it does work!): 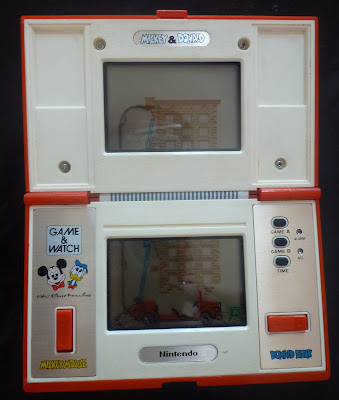 And rounding out the purchases were a bunch of miscellaneous cables and stuff that I needed to "complete" some other old consoles I have lying around: 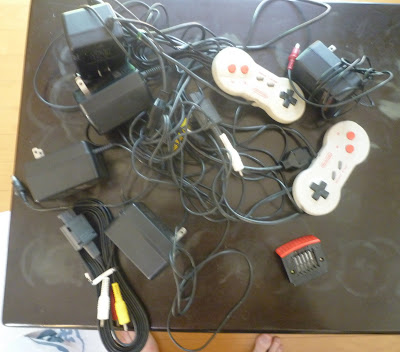 All in all, an amazing haul when you consider how little it all cost. If I can just repeat that total: 3450 yen. Yup. For less than the cost of a single Wii or PS3 game I got all of the crap in the following photo. Is it any wonder that I don't buy current generation console stuff? 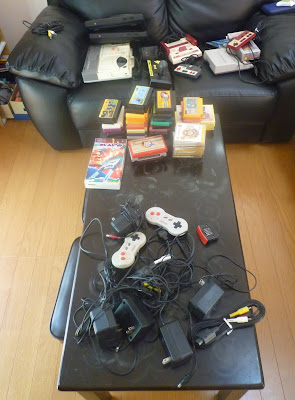 The missus might not be happy if I don't get our living room looking like normal again by the time she gets home though, so I better finish this post here and go tidy this up.
Posted by Sean at 1:19 PM