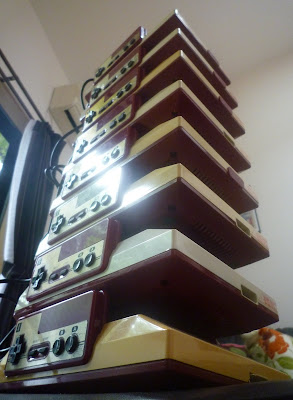 I believe I may have set a new world record today by stacking 8 Famicom consoles on top of each other.

Actually I just base this on the fact that a very brief google image search did not turn up any pictures of more than 8 Famicoms stacked on top of each other. Likely someone has at some point stacked more, I only stopped at 8 because I only had 8 Famicom consoles at hand. If you've got more than 8, you can probably stack more than that. Though I should stress that you should be careful, my stack of 8 was getting pretty wobbly.

At any rate, until someone shows me evidence to the contrary, I stand by my claim to have the world record. So there. 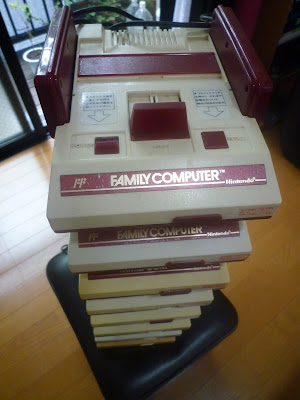 You have to admit though, 8 Famicoms stacked on top of each other look pretty cool. 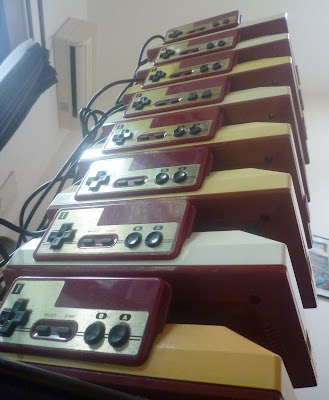 You may ask (and why wouldn't you?) what on earth I am doing with 8 Famicoms. To this I answer that I don't actually own 8 Famicoms. I own 12. But the other 4 are Twin Famicoms and AV Famicoms and they would have made my stack look stupid so I excluded them on artistic grounds.

I guess the next logical question is why the hell do I have 12 Famicoms. Good question. I think I am kind of addicted to acquiring Famicom consoles. Whenever I see a cheap one in some bargain junk bin I just have to buy it. Then I take it home, clean it up and try to fix it with my limited knowledge of electronics (ie I bang them until they start working). 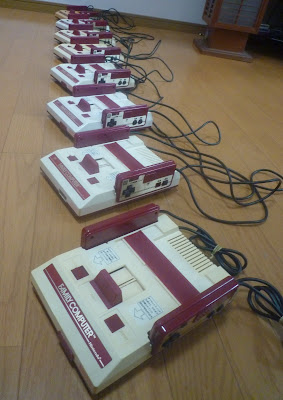 My ultimate intention is to somehow find good homes for them, probably via ebay or something. But I don't have an Ebay account or anything and can't be bothered to get off my ass and figure out how to set one up. Thus a bottleneck has developed in my spare room where Famicom consoles just endlessly pile up. Its a vicious cycle. 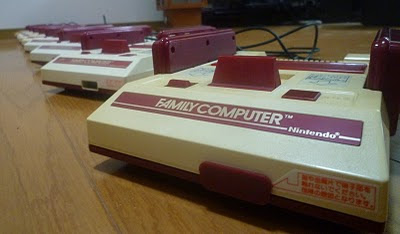 Mind you, as far as destructive habits go, I think this is a pretty mild one to have. Much better than being addicted to heroin or something. Though I will say this: Heroin addicts don't need to devote anywhere near as much shelf space to their habit as Famicom console addicts do. So, you know, they've got that going for them.

Apart from the minimal joy I received today from stacking them up, the extra ones don't really have much other purpose in life at this point other than to deny me the use of several square feet of the above-mentioned valuable shelf space. So I tried to make the most of it by arranging them in various poses on the floor of our living room and even going so far as to be-deck them with some pulse-line carts: 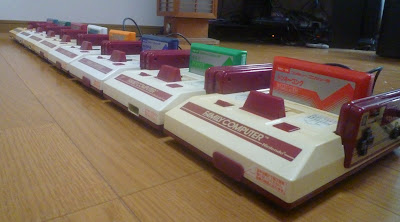 I spent 4 years in the army back in the 90s. I think this may have been the inspiration for the drill-square precision with which I insisted on arranging them: 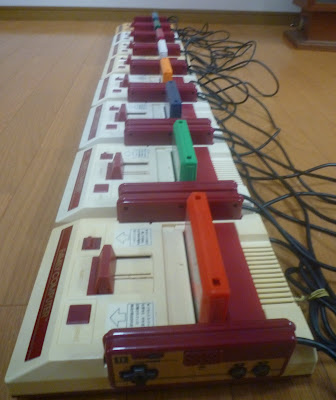 Nothing prettier than a cleanly-dressed line of Famicom carts. 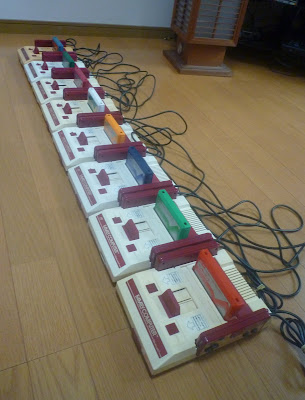 I then put them through a couple of other Family Computer maneuvers: 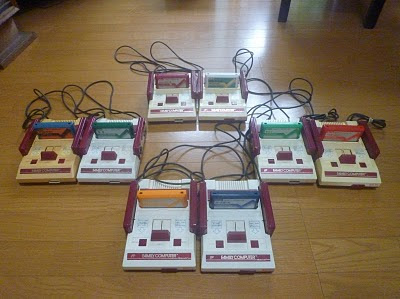 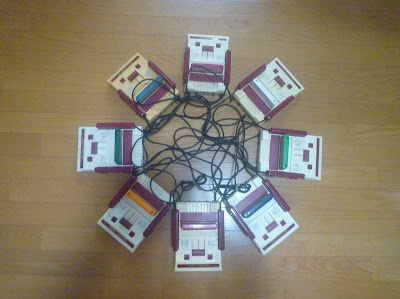 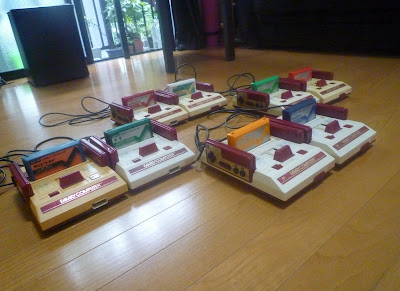 And then back onto the shelf with them.