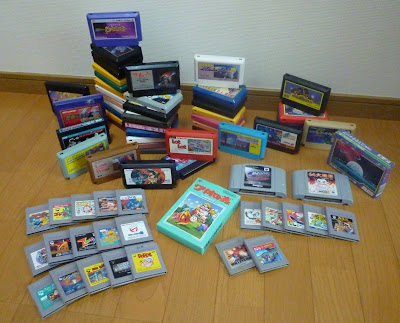 I went back for a couple of more 800 yen shopping sprees at Omocha Soko this week. I have more or less completely picked over the entirety of their Famicom and Gameboy selection, which now consists of stacks upon stacks of Mahjong and Moero Pro Yakyuu, which they seem to have hundreds of copies each of which nobody will ever buy. 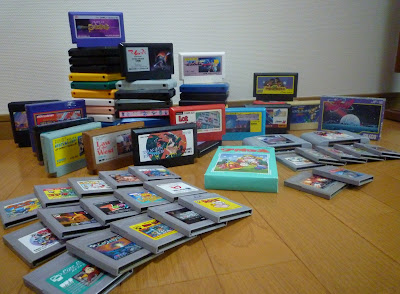 About 75 games in total. Not bad when you consider that I only paid about half the price that any single one of these games would have cost new back in the day. With these latest additions my Famicom collection is now up to 467 different carts - I'm almost halfway there!

I got a couple of CIB games in today's lot - Wario No Mori and Uchusen Cosmo Carrier. Generally I don't usually bother with CIB games because they cost more and take up more storage space (and its a pain in the ass to try keeping the boxes in good condition). But these ones I really like. Unlike games on pretty much every console since, most of the Famicom games came in cardboard boxes, which I think look a lot better than plastic. It also means that they are a lot rarer, as most people just threw them out. 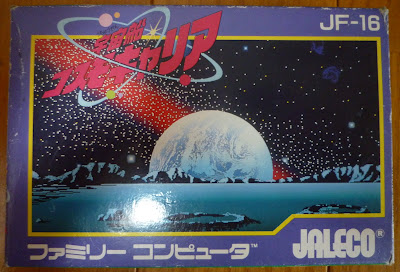 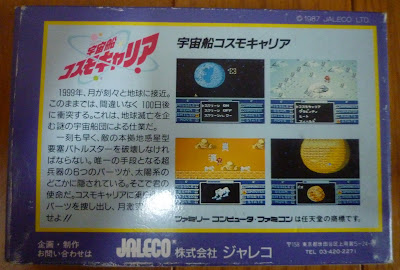 The artwork has a look that reminds me a lot of the sci-fi themed comics, games and toys I used to love as a kid in the 1980s.

I also like the fact that it is set in the futuristic world of 1999, where we are fighting space wars on the moon or something. It always amuses me to remember how I thought the 21st century would be like when I was a kid. A lot of the cool sci-fi movies from the 80s got it wrong. Like Star Trek 2: The Wrath of Khan, in which the villain (Khan) was a tyrant who ruled half of Earth with an iron fist before being sent into deep space in the year.....1996?

Also I remember liking the movie 2010 starring Roy Scheider which came out in 1984. It was the sequel to Stanley Kubrick's 2001 and basically involved a follow up mission to Jupiter to find out what went wrong. Here it is, 2010 now and we can't even afford to send people to the moon anymore.
Posted by Sean at 2:40 PM