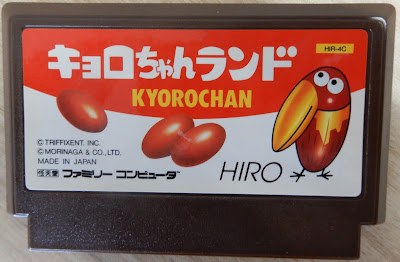 I bought Kyorochan Land the other day.  Its the first Famicom game I have scratched off my want list in over three years and I'm quite happy with it.

I have been aware of this game for years because it is one of the somewhat rarer and more sought after Famicom titles in Japan.  The lead character is Kyorochan, who is a mascot for Morinaga Corporation's Chocoball snacks.  I had always assumed that this was some sort of limited release product tie-up with Morinaga which explained its rarity, but it turns out it is just a regular Famicom release.  Its status as a high priced game seems to come from the fact that it was simply released late in the Famicom's lifetime (it was released in December 1992, despite the 1991 copyright date on the cart) and thus not many copies were sold.

I kind of like the game's cover art, which looks like the cover of a Chocoball box.  I like it so much in fact that I went down to the conbini and bought a box of them for comparison: 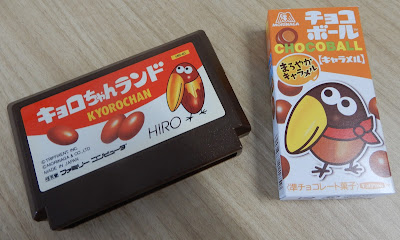 26 years after Morinaga somehow finagled their way into the biggest instance of product placement in Famicom history, their efforts to induce purchases of their snacks continue to pay dividends (84 Yen dividends in this case).

I chose the caramel flavored ones which have  a different color scheme than the Famicom game (which uses the chocolate flavor coloring).  I like caramel.

The box opens on the top: 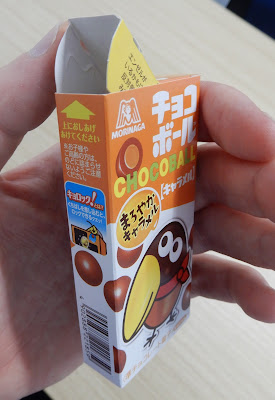 The chocoballs themselves are significantly different from what is on the cart, which looks more like chocolate covered almonds.  Chocoballs are...well...balls, not ovals.

The game itself I should mention is a straight up port of the NES game Nebulus with just a few adjustments (like making Kyorochan the main character),  So if you like that game, you'll probably like this one.

This is one of those games that I really regret not having purchased a few years ago as it has gone up in price quite a bit.  I was browsing my old posts and came across this one from 8 years ago (how time flies) which shows a copy of it available at the old Mandarake in Fukuoka for 2900 Yen.  I ended up paying about double that for this copy!  D-oh!