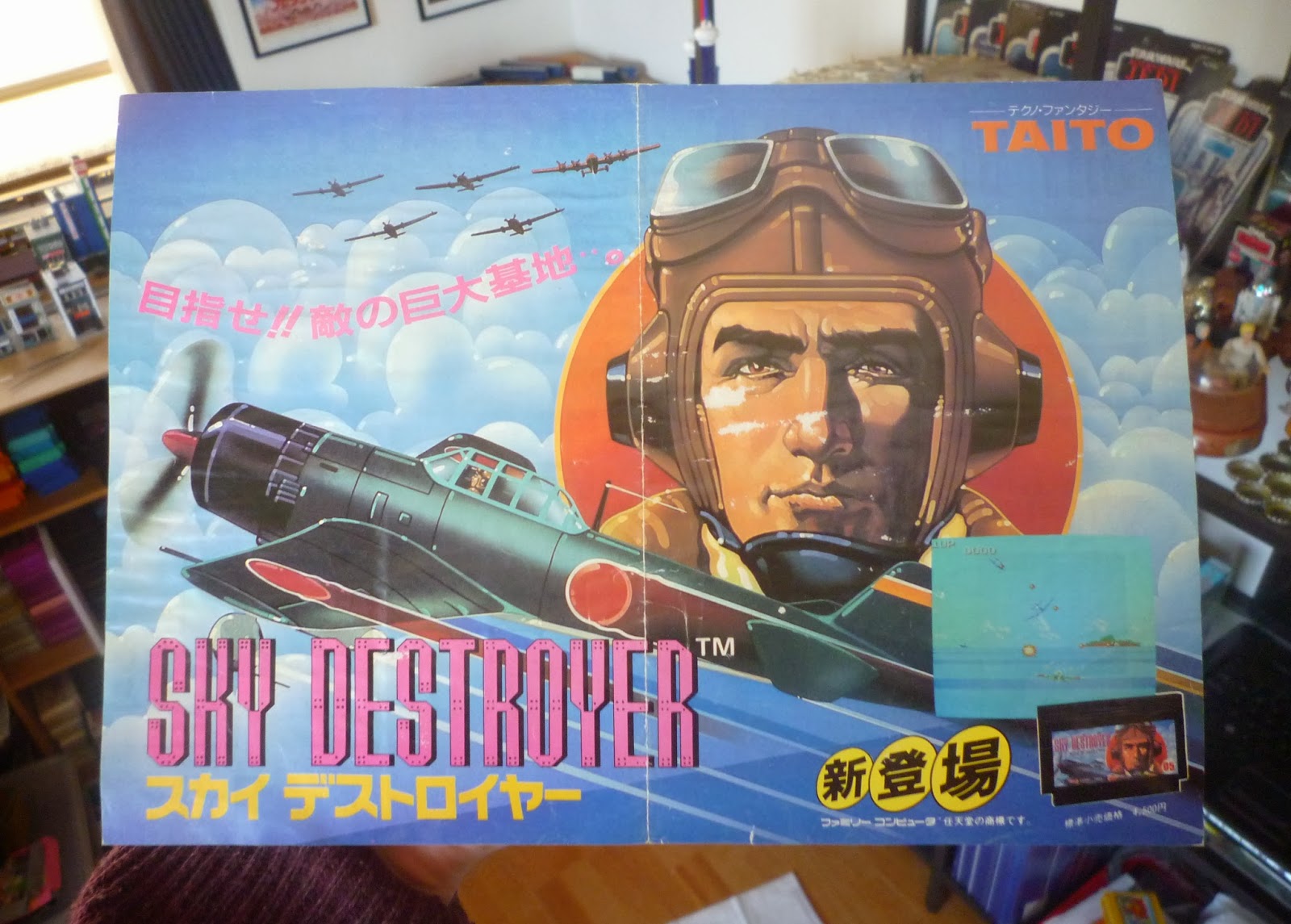 I came across a little 10 yen (10 cent) bargain the other day, an original chirashi (flyer/mini poster) for Sky Destroyer by Taito.

It is in pretty rough shape, wtih a crease down the middle, some wrinkles here and there and some surface wear on the pilot`s face. Still I count this as a pretty cool purchase.

Sky Destroyer was a Japan-only release on the Famicom that never made it to the NES.  Somehow I forgot to include it on my recent overview of Japan-only releases.  It is not a bad pilot-perspective shoot em up. The gameplay is somewhat similar to After Burner, only not quite as good.  I still like it though, the graphics are a bit primitive but in their simplicity they make the screen look pretty cool.

I guess it is pretty obvious why this was never released outside of Japan - you are flying a Zero in World War 2 and trying to shoot down American planes.  No way in hell that would have been released anywhere but Japan, unless they reversed the roles.

Anyway, politics aside I`ve always really liked the cover art on the Sky Destroyer box (and by extension my new chirashi). 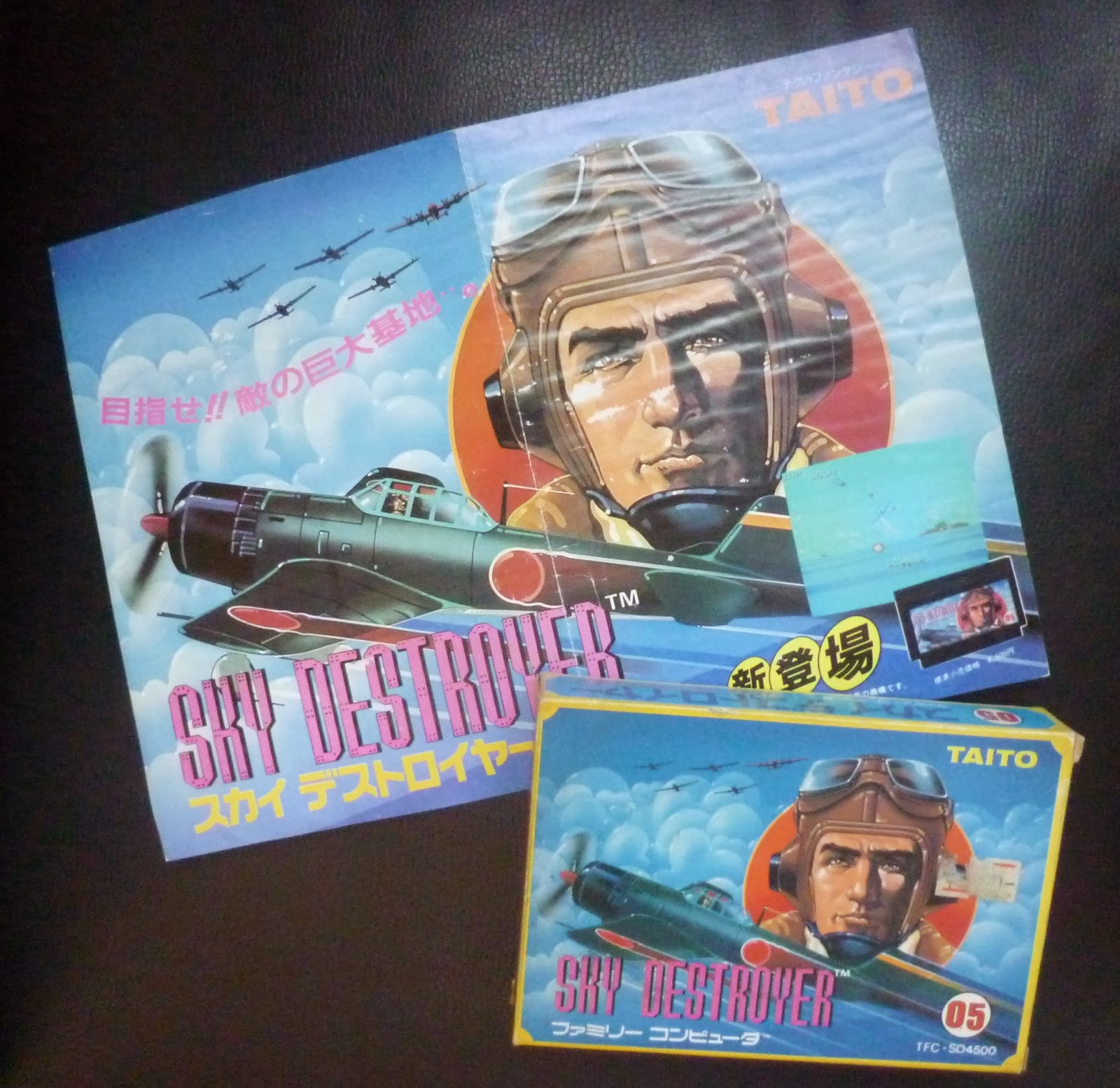 It has the perfect balance of color - the blue sky, green plane, yellow border and pink lettering of the game title. 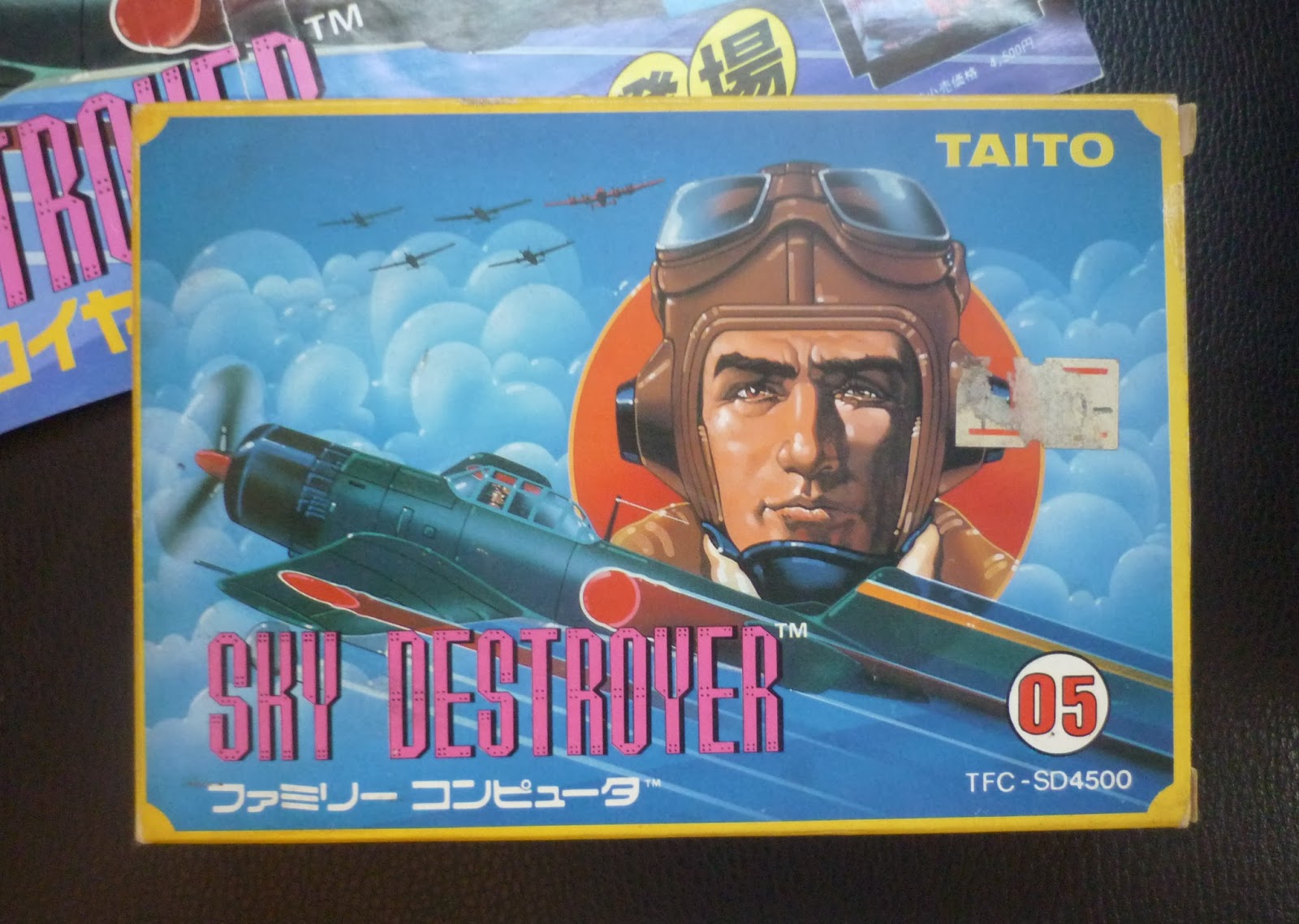 This was one of the early Taito series that came numbered.  Sky Destroyer is number 5 in the series.  The back of the chirashi has an ad for the first four, Space Invaders, Chack n Pop, Front Line and Elevator Action: 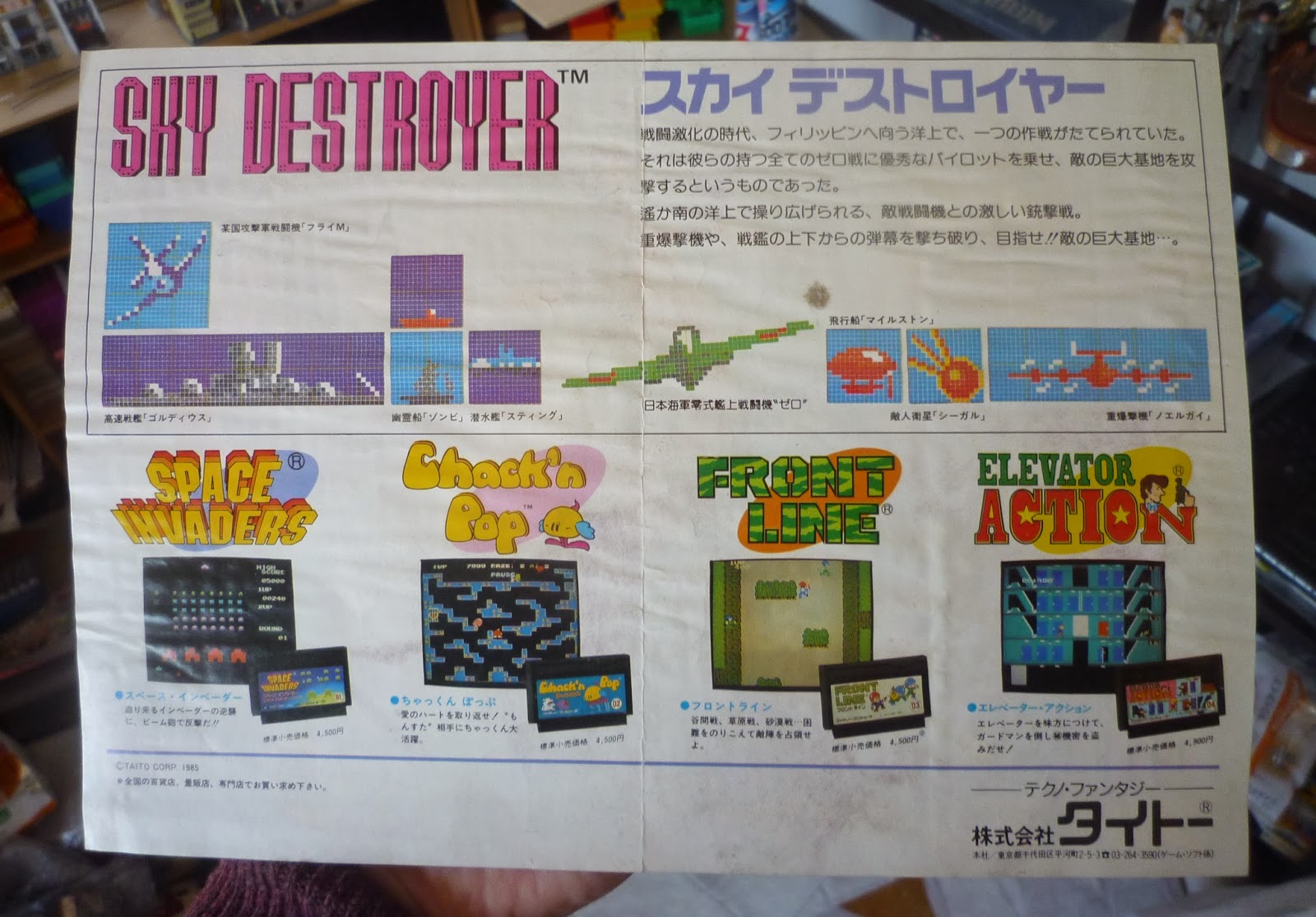 Actually all of those also have really awesome cover art.  I have Chack n Pop and Space Invaders CIB and they are both pretty cool, especially Chack n Pop.  Elevator Action in particular is a game that I really want to find CIB and to get a chirashi for.  The artwork on that one is even better than Sky Destroyer and probably one of the best out of the entire Famicom catalogue.

For now though I have put my Sky Destroyer chirashi in a little frame next to my DC Cab movie poster, which is by far the coolest thing that I own.  I think they go well together. 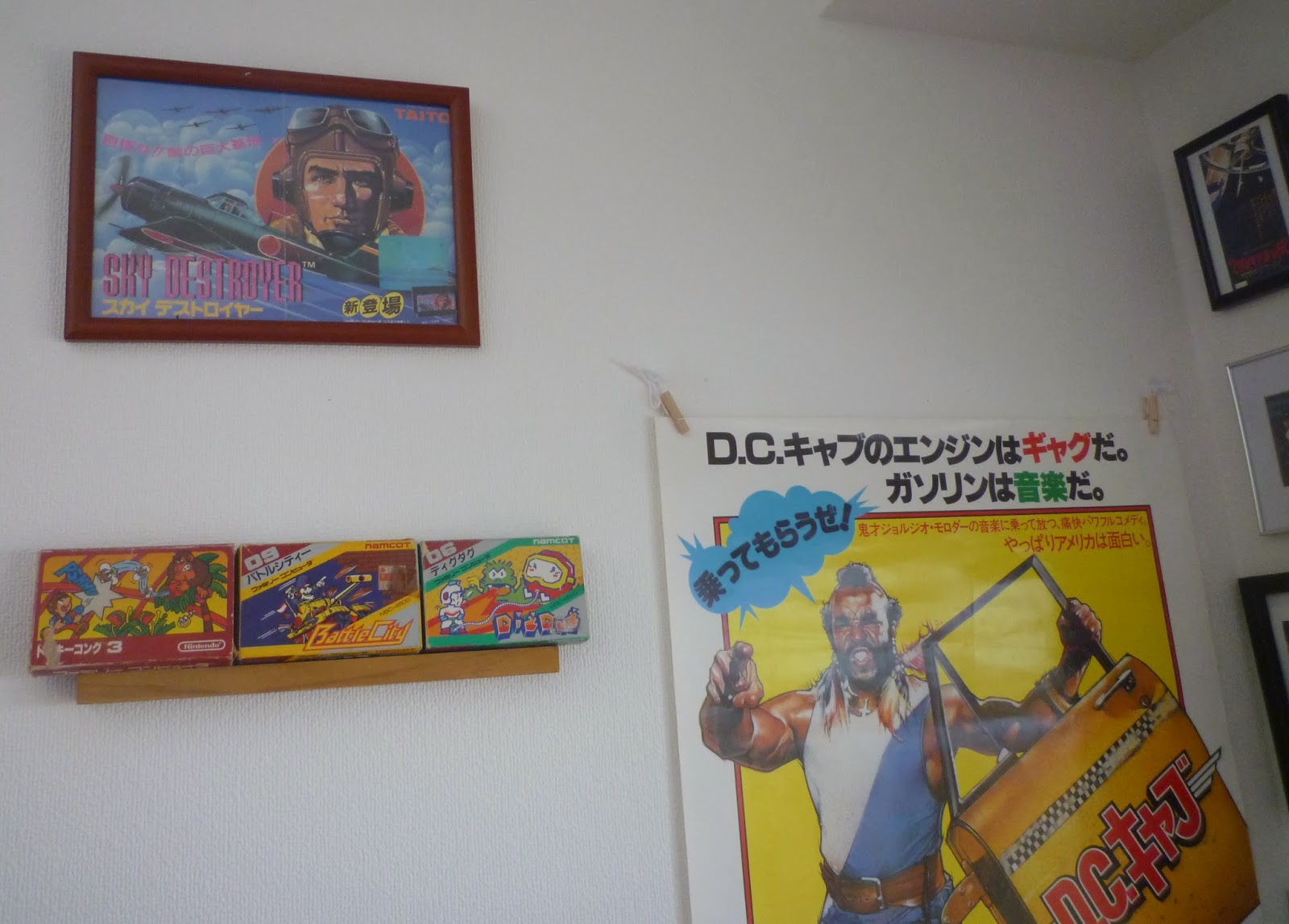