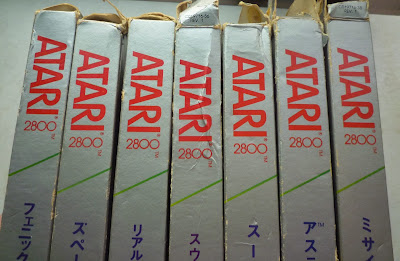 As I mentioned in an earlier post, as of May this year I officially became an Atari 2800 owner. The 2800 is basically the Japanese version Atari 2600 (later released as the Sears TeleGames in North America) but much much rarer since almost nobody bought them in Japan.  It was released just a few weeks before the Famicom, which sealed its doom alongside the Bandai Intellivision, Epoch Cassette Vision and Sega SG-1000.

Only 30 games were released for the Atari 2800, all of them Atari 2600 games.  In fact the cartridges are completely identical - the Japanese carts still say `Atari 2600` on them.  So the only way to know if you have an Atari 2800 game is if you have the boxes, which were made specifically for the Japanese market.

The seven games I got all had their boxes, albeit in fairly beat up condition.  They were all pretty common titles on the 2600 - games like Space Invaders, Missile Command and Asteroids - but there were probably only a few thousand 2800 copies ever sold.  The boxes look pretty cool, I love the artwork:

I think Asteroids is my favorite: 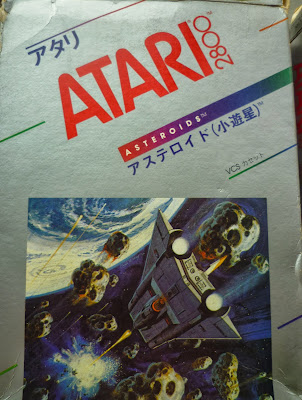 As I also mentioned in that earlier post I have been having a hell of a time trying to play my Atari 2800 - and all my other old RF consoles - thanks to the fact that our (evil) new big screen TV doesn`t have an RF or Coax connection.

I did the natural hipster thing and bought a 1989 Sony Trinitron TV off of Yahoo Auctions to give me something to play my old beauties on.  I based that purchase solely on the fact that it was an awesome red TV and I think red TVs just look cool.  While it does look cool sadly my red TV is pretty lousy at playing games.  If you have ever used an old Japanese TV perhaps you are familiar with the many frustrations of having to manually tune the set.  It is not fun.  After close to an hour of fiddling I was finally able to play one of my new games -Super Breakout - in all its glory: 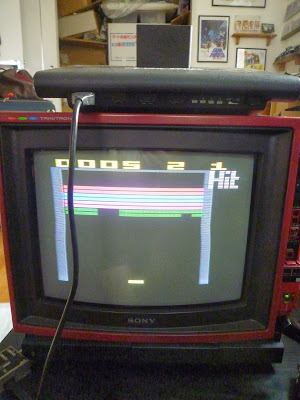 After about 10 minutes of that though a slight gust of wind moved some dust which had accumulated on the upper right corner of the set.  The change in weight was enough to cause the tuning to go all out of whack and no matter how much I theatened it, it did not return and I was left with: 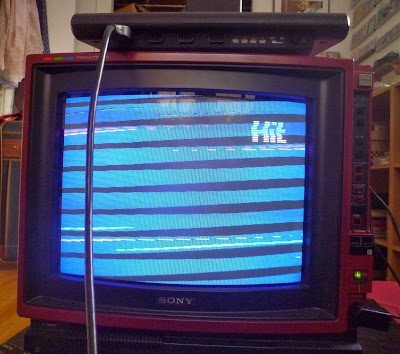 So now I am faced with the fact that if I really want to enjoy these games I will probably have to buy one of those ugly grey TVs from the early 2000s which sell for about 500 yen each.  They don`t look anywhere near as cool or retro (or red) as my nice old Sony but they probably will actually allow me to play a game without much aggravation so I think I`ll bite the bullet.
Posted by Sean at 7:13 PM