Famicom History: Toy Catalogs and Over the Hill Consoles 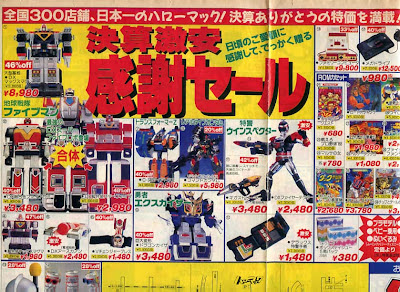 I was browsing the Japanese web yesterday and stuｍｂled across the above fragment of a toy catalog (on Livedoor) from the early 1990s. I have no idea what store it is from since the name is cut out, though they did have 300 locations nationwide so it must have been a big one.

What caught my eye was not the toy robots that you immediately notice, but what was in the upper right hand corner of the ad: 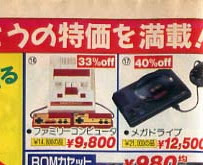 Only 9,800 yen, 33% off as the ad notes (the release price was 14, 800 yen if memory serves). This catalog (or flyer more likely) seems to have been printed relatively late in the Famicom`s life - notice the ad for the Mega Drive right next to it for 40 percent off, meaning it must have been a few years into that console`s lifespan as well.

Right below that we have some Famicom games ("ROM cassettes") for quite cheap prices: 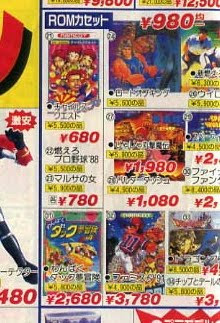 Lord of King for only 980 yen, Child`s Quest for only 680 yen and Moero Pro Yakyuu or Marusa no Onna for 780. On the far right it looks like Final Fantasy is also listed for two thousand and something yen, but half of it is cut off. Family Stadium 91 is quite expensive at 3780 yen so it must have been a new release at that time. Guess that would probably date this to 1991.

I love finding this sort of stuff. When I go to old book stores I always have a look at magazines from the 80s just to see if they have any Famicom ads (they almost never do unfortunately).

What I like in particular about this one is that it is a piece of Famicom history not from its peak in the mid to late 80s, but from the early 1990s when its glory days were behind it and it was no longer the sought after toy it had been just a few years prior. It is the inevitable fate of all consoles: to make the undignified transition from must-have Christmas item one year to department store clearance item the next. The store probably had a big pile of them by the door, with bins full of discount games next to them.

In 1991 I was in high school in Canada and I can remember Zellers doing something similar with the old Atari consoles. They had a pile of them for $49.99 and huge bins of software all priced at $4.99 each. I didn`t get one but can remember being tempted. I guess my Japanese contemporaries were doing the same with these old Famicoms.