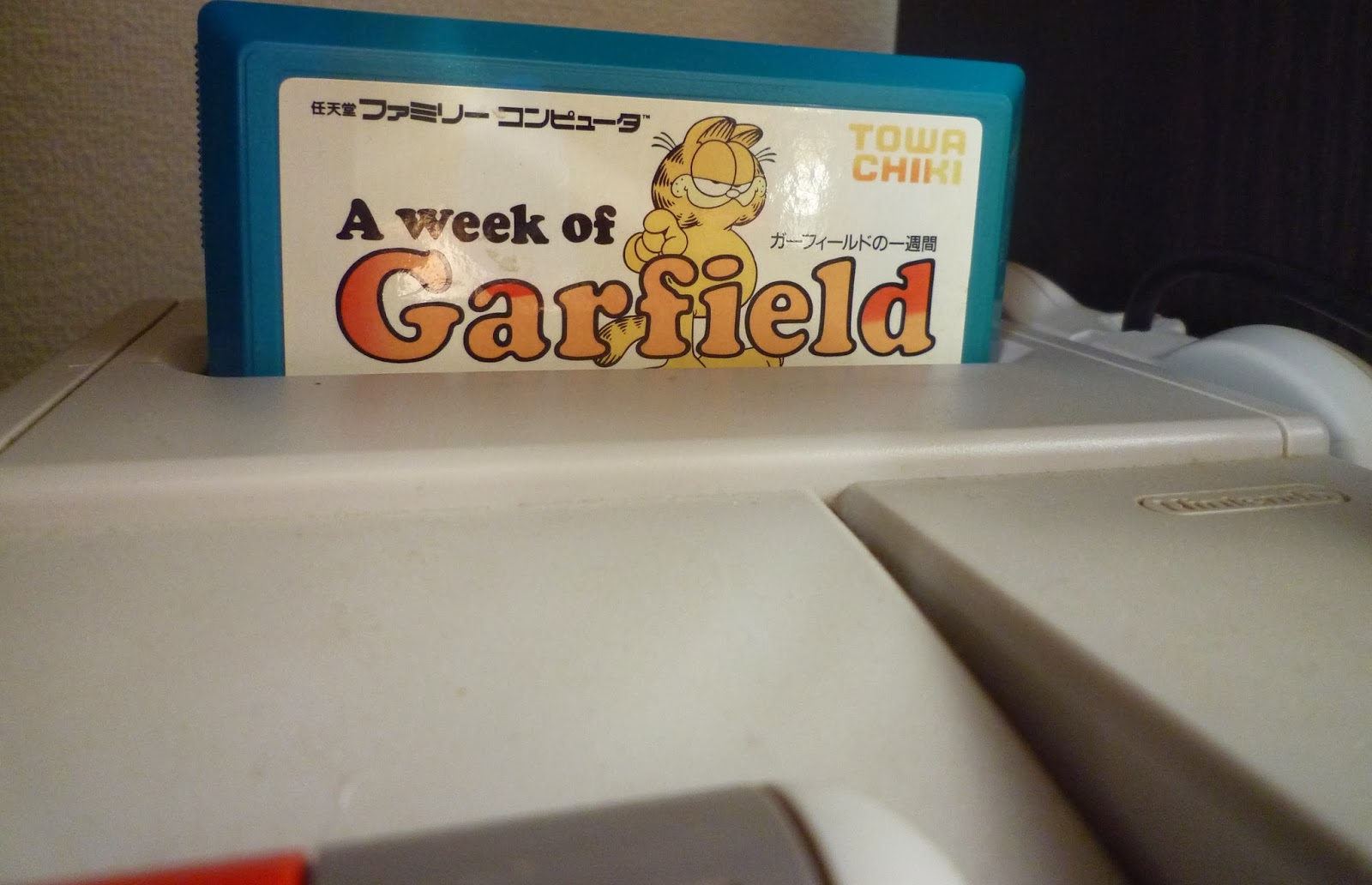 A Week of Garfield is one of those games that if you haven`t played it, you really don`t know what you are missing.

I am not sure if I mean that in a positive or a negative way. Over on GameFAQs it is one of the worst reviewed games around, getting an average rating of 2/10.  The reason for this is its difficulty.  This is a massively hard and frustrating game.  Garfield is hyper sensitive to being touched and you only have one life so you have a life expectancy somewhat akin to that of a First World War fighter pilot on the Western Front.  This probably explains why it was never released on the NES, despite the character`s massive popularity in the US back in the 80s (ironically in Japan Garfield was never a well-known character).

That said, it is also one of my favorite games for the Famicom.

The reason for that I can sum up with a quick anecdote.  I had some American friends over a couple of months ago, two of them were video game fans familiar with the NES.  We played a few of the normal classics - Rockman, Makai Mura, some of the Kunio games, etc.  But the game that got the biggest positive reaction by far?  Week of Garfield.

The reason I think can be summed up by the fact that the game is crazy difficult in a way that is just really really amusing.  It is a  side scrolling platformer and you contorl Garfield: 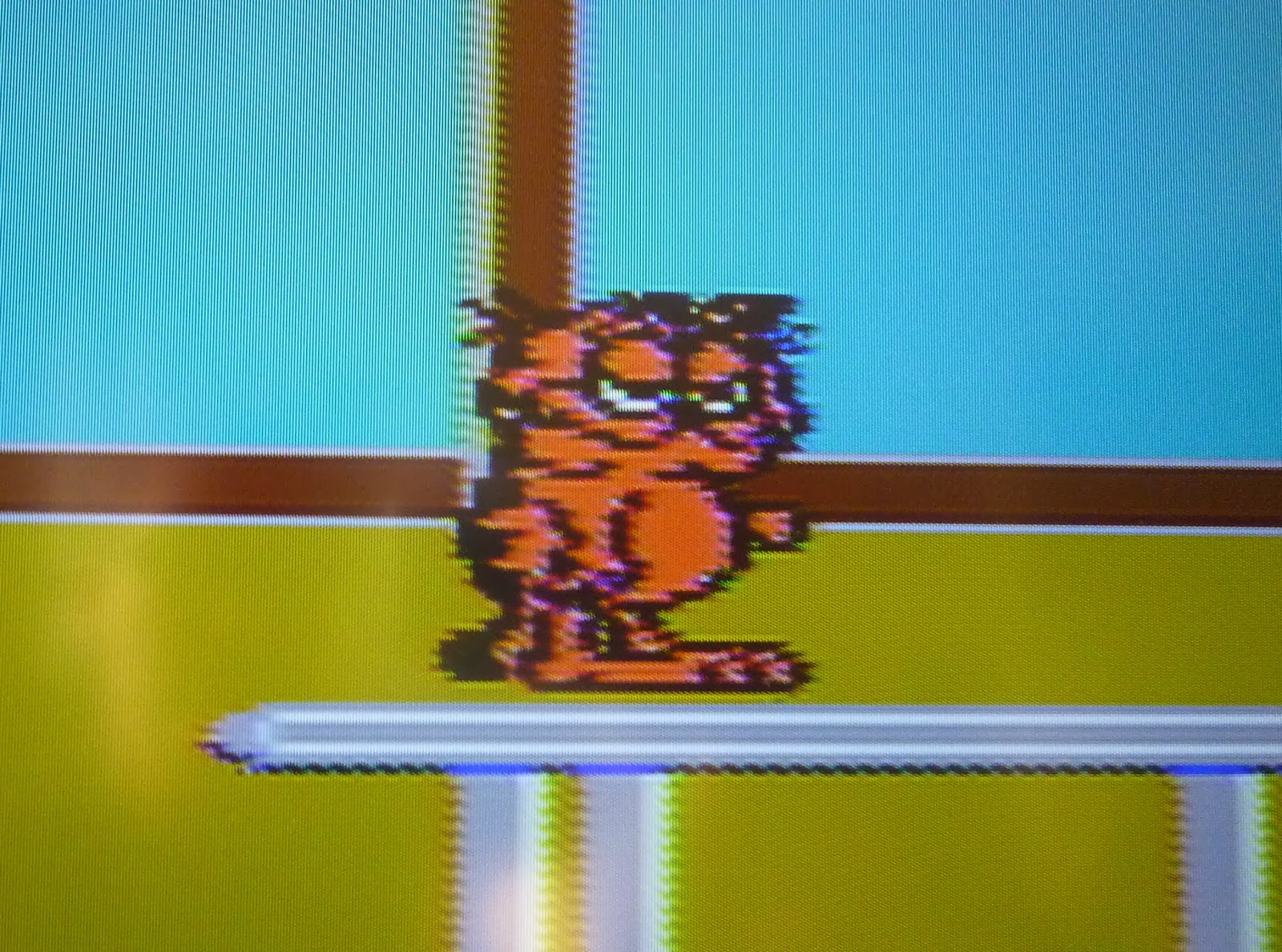 If it is your first time playing it what will probably happen is that you will move Garfield forward for about 5 seconds, then you will encounter a mouse and a worm.  You will probably accidentally touch one of these which will cause Garfield to do a hilarious looking face plant:

Then the screen will immediately flash `Game Over` and that is that.

I`ve never seen people laugh so hard at how bad a game was.  The thing is, Garfield manages to be a bad game whose awfulness actually makes you kind of like it.  Something about the sudden unexpectedness of how fast the game ends just makes it a great group activity.

To be clear: this is not a game you want to play all the way to the end unless you are a member of one of those Catholic sects that views playing this game as an acceptible substitute for self-flagelation.  You will grow to hate it.  But in small doses, it is hilarious to watch someone play.

This gave me the idea for a good Famicom party activity - a Kuso game marathon.  A `kuso` game is what Japanese call awful games for the Famicom and other old consoles.  Week of Garfield is a prominent member of the kuso game club.  Platformer kuso games like this generally suck if you play them alone, but in a group they are actually quite fun.

So if you have a video game get together, I think it would be cool to try to organize some sort of kuso game marathon.  A few other titles that come to mind are Transformers Mystery of Comvoy and Spelunker - insanely difficult games that result in almost immediate death to first time players.

The built in quick death actually makes these games ideal for parties.  Watching someone play a game they are good at can be, if we are all honest, about as interesting as watching paint dry.  It is fun for the person playing, but for everyone else they are just kind of waiting their turn.  If the guy spends 30 minutes playing Spartan X all the way to the end, that is just going to bore people.

The fact that kuso games kill you immediately eliminates that - every 30 seconds or so you will be changing turns, meaning that it will be a fast paced activity ideal for a party.  And it also lends itself to friendly mockery of people who die quickly while at the same time giving those people an excuse not to take that personally - it is the game`s fault that they die so quickly after all.

Famicom Party Game! Loads of Fun!
Posted by Sean at 10:30 AM