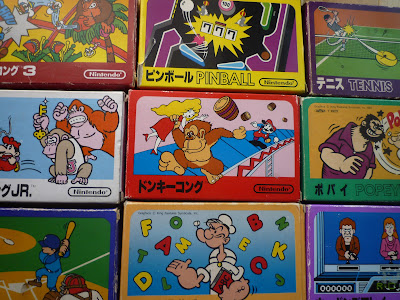 As the part of the title that precedes the colon states, I`m back.  Well, I never left really, I have just been too busy.  Today I am home sick from work (just a cold, nothing to worry about) and for the first time in 2013 I find myself with a few spare moments to devote to my beloved blog.

Ah how I have missed it.  I thought I would do a post on one of my sub-collections - the small box early Nintendo carts CIB. 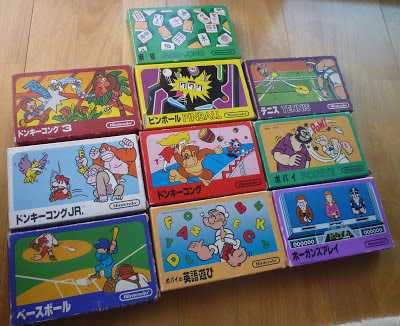 This is a very difficult to name series because it doesn`t quite correspond to the pulse line carts - Hogan`s Alley for example doesn`t have a pulse line version of the cart but has one of these boxes while Devil World, which does have a pulse line cart, was only sold in the larger silver boxes so far as I know. So tempted though I am, I can`t just refer to it as a CIB set of the pulse line carts even though that is almost what they are.  That means, you know, just look at the pictures to figure out which CIB games I am talking about here. 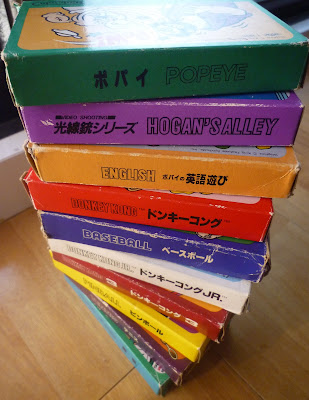 These, along with the early Namco boxes of similar size, are my favorite Famicom games in terms of boxes.  They just have the right balance of size, color and evocative-yet-simple artwork on the cover to lure me in.  If I had been a kid in 1983 and been confronted with a sales display full of these I definitely would have bugged my parents for them until they became so massively fed up that they just bought me one to shut me up.

Come to think of it I was a kid in 1983.  Lucky for my parents that they never took me to Japan.

Anyway, I only have 10 of these which means I am still a few short of a set.  That includes some of the nicer ones like Mario Bros and Donkey Kong Jr. Math.  Fortunately none of them are expensive so hopefully I`ll track them down at some point.  Sadly that will probably have to be on Yahoo Auctions or somewhere similar as I don`t get out to the shops anymore like I used to.

Anyway, I think the Donkey Kong one is probably my favorite of the ones I do have.  It is a very cool piece of pop art.  I think once I finish the set my next project will be to try and devise some way of properly displaying them all as my current method (putting them in a box stored under the bed) just isn`t doing them justice at all.
Posted by Sean at 4:10 PM