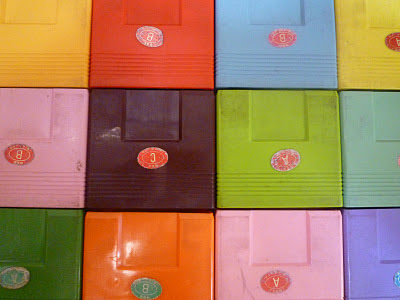 I was at Omocha Souko today browsing their junk section. It has been an amazing week for me there, I picked up the Famicom Robot a couple days ago for a steal. Today I found something just as good.

As I was looking at the usual junk, I noticed these babies sitting on a bottom shelf: 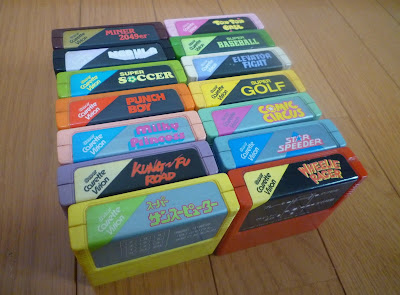 Just to put into perspective for you how hard these things are to find, I have spent a ridiculous amount of time over the past 3 years wandering through the aisles of pretty much every game store in this city. Before today I had never seen a single Super Cassette Vision cart in my life. These things are massively hard to find, even Mandarake doesn`t have any. A quick search on Ebay just now turned up only a handful of the things, the lowest price for a single game being 24$. Yahoo Japan Auctions has them for slightly lower starting bids, but even there the pickings are slim. These are about as rare as retro video game carts come.

I knew I had to have them, they just looked way too amazing to leave there. The only problem was that I didn`t know how much they were. The junk section at Omocha Souko is usually just for consoles and accessories, not games, so they only had prices listed for those things.

I flagged down one of their staff and asked how much. He didn`t know and went to go ask one of his supervisors in the back. I stood guard in front of the shelf while he did so, warning off would-be Epoch Super Cassette Vision cart purchasers with my nasty `These Epoch Super Cassette Vision carts are MINE` look (trust me, you don`t want to see that look).

`I see` I said, rubbing my chin as though weighing the purchase decision `thank you`.

As soon as he was around the corner I grabbed a basket, slammed my forearm onto the shelf and swept the whole lot into it in one motion. I then speed-walked to the cashier to pay for them immediately and get the hell out of there before they changed their mind.

These things are just amazing. If you are a regular reader of this blog you know that one of the reasons I love Famicom carts so much is how colorful they are. They just look a million times cooler than the boring grey Super Famicom or NES carts.

Until today I had never seen a video game cart that could give the Famicom cart a run for its money in terms of appearance, but I have to say the Super Cassette Vision carts do. Just look at those colors:

The carts are about two-thirds the size of a Famicom cart: 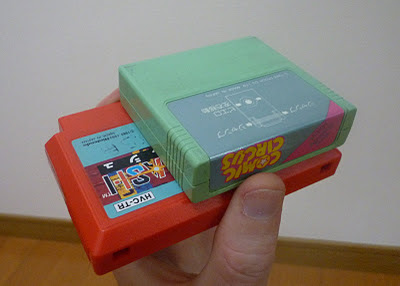 The main surface label on each is a mini instruction manual that tells you which controls do what in the game: 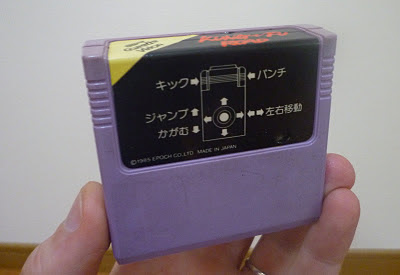 And the top label has the name of the game, making them extremely easy to identify when stored:

Unfortunately the one thing I am missing is an actual Epoch Super Cassette Vision console to play these on. I have an Epoch Cassette Vision (without the `Super`), but they aren`t compatable with it. Someday though I am going to figure out what Comic Circus, Milky Princess, Elevator Fight, Ton Ton Ball, Miner 2049er, Punch Boy and...well all of these games are like. They sound awesome.

I might add a bit here about the history of Epoch and these games as it is kind of interesting and not much has been written about it in english. When you read about the history of video games, the 3rd generation is usually portrayed as a two-way race between Nintendo and Sega which Nintendo overwhelmingly won with the NES/ Famicom.

In Japan though it was more of a three-way race won by an even more overwhelming margin by Nintendo over Sega and Epoch (and Bandai and Atari, which also made attempts to compete).

Epoch actually beat Nintendo to the chase though by releasing the Cassette Vision in 1981 - the first successful cart-based system to be released in Japan. At one point they controlled 70% of the Japanese home video game market. The release of the Famicom in 1983 wiped that out completely.

The Super Cassette Vision was Epoch`s attempt to compete with Nintendo to regain some of its market share. It teamed up with NEC (later maker of the PC Engine) to develop the hardware, which was released on July 17, 1984.

The system never took off and Nintendo was able to capture 95% of the Japanese market during that generation. The Super Cassette Vision was discontinued in 1987, with thirty games having been released for it. Shortly thereafter Epoch started releasing titles on the Famicom as a third party developer.

Anyway, its an interesting snippet of Japanese video game history. And I just grabbed almost half the console`s entire library of software for about 20 bucks!