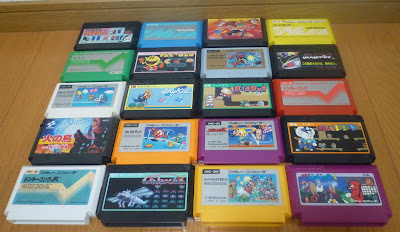 In this post I will introduce the latest Famicom party game craze that is sweeping Japan. Well, "sweeping Japan" is an overstatement, but at least some Japanese people are doing it (see the video linked below).

All you need is a Famicom, about 30-50 Famicom games, a cardboard box and between 2 and 10 people.

The basic rule of the game is this. You have a bunch of Famicom games. You write down the names of each game on a scrap of paper and put them into a cardboard box. Each person takes a turn drawing a game name from the box. After removing the game name from the box, the person then has to complete level 1 of whatever game that is without losing a life.

The game does not finish until the group of you have collectively done this 10 times in a row without losing a life. Each time someone loses a life before they've completed level 1 of the game, the counter goes back to zero.

This can be a really fun group activity, particularly if you have been drinking. I've done it a few times. The tension really builds up when the group has finished 5 or 6 in a row.

One of the keys to making it fun is game selection. You have to choose games that have a level 1 and in which you can lose a life (ie no baseball games, etc). The photo at the top of this post shows a selection of 20 games that are usually in my lineup for this activity. Depending on the skill level of your group you might want to avoid putting tough games like Spelunker or Sky Kid in the mix.

This is a really interesting video on Youtube of a group of Japanese Famicom fanatics playing this game. They dress up in cosplay as they do it and make an evening out of it. They have put a series of such videos up and they all make for interesting viewing if you are a Famicom fan like me. Their big mistake is choosing games that are too difficult, though it kind of adds to the fun - note the exasperation on the girl's face when she gets stuck with Spelunker. The girls do criticize the host for the poor game selection a bit towards the end of the video.

Just to add a bit of trivia I should note that this game originated on a TV show called "Otameshika" that airs on Monday nights in Japan. Nowadays it isn't much of a show, but a couple years ago they would sometimes do these really awesome Famicom themed episodes in which the two hosts (the comedians Taka and Toshi) along with a few guests would play. It would usually take them quite a few hours to do 10 in a row. If you have less time you might want to change the rule to 5 in a row or something like that.

I should also note that while I say it is a game for the Famicom, you can also play it with an NES, Atari 2600, Sega Master System or any other early console with a large library of games.

Anyway, this is a fun party activity if you have a small group of people who all like old video games. Give it a try.
Posted by Sean at 9:55 AM